Hidden among the other 37%

The November jobs report released last week showed another step in the right direction for the U.S. economy as unemployment rate fell to 4.6%, the lowest level since 2007.  The economy added 178,000 jobs in November continuing the momentum that has kept unemployment rates steadily at or below 5% throughout 2016.  The primary factors behind the unemployment rate improvement in November: number of jobless workers decreased, number of people with jobs increased, and the total size of the labor force decreased.  Yes, that third point counts as a “good guy” in the calculation – that the size of the labor force decreased.

The labor force participation rate fell to 62.7% in November, the lowest number since 1978, and has been on a consistent downward trend over the last 10 years.  Economists project this number to continue to decline by approximately 0.2% per year over the next 10 years as the number of retirees, i.e., Baby Boomers, outpace the number of new entrants into the workforce.  The labor force participation rate is often an overly politicized statistic, and the Chicago Tribune points out in a recent article that a focus on labor-participation drop is a losing battle.  While we agree that most of the underlying dynamics relate to inevitable demographic shifts in the U.S., no one can argue that there are some problematic issues imbedded within the data.

In June, The Atlantic released an excellent article called The Missing Men shortly after the White House released a report called The Long-Term Decline in Prime-Age Male Labor Force Participation.  Both the article and the government report highlight an unfortunate trend among working age men – that they are not working as much anymore.  As shown in Figure 1 below, labor force participation rates for prime-age men has been on a steady decline since a high of 98% in the late 1950s, now coming in around 88-89%.  Among prime-age men, this number is less than 80% for those that did not graduate from high school and less than 85% for those with high school degrees but no college. 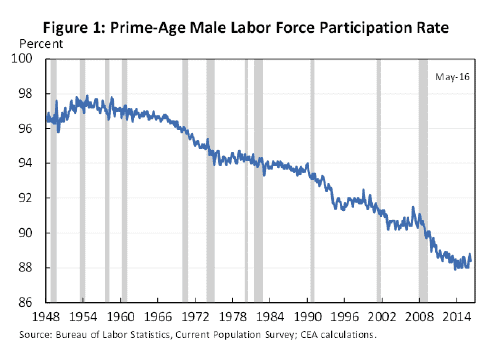 The Atlantic explored four potential, and often cited, hypotheses behind this trend: Are they in school?  Are they on disability?  Are they stay-at-home dads?  Are they in prison?  While statistics show that each of these have been on an upward trend over the last few decades, The Atlantic article concluded that these four factors alone were not sufficient to truly explain the phenomenon.  As explained in The Atlantic:

“But behind all of these trends, there is a larger story: the decline of sectors [historically] dominated by male workers. In 1954, the highwater mark for male participation, the manufacturing and construction sectors accounted for nearly 40 percent of all jobs.  Now, after the long decline of manufacturing and the end of the housing bubble, they account for just 13 percent.  These are jobs that men without a college degree can count on, and they're much rarer than they used to be.  The White House report notes that ‘when the share of state employment attributable to construction, mining and to a lesser extent manufacturing are higher, more prime-age men participate in the labor force.’  In other words, men are more likely to work in areas where the state directly subsidizes employment in male-heavy occupations.

But the private sector is shifting toward work that has historically been done by women. There are four occupations expected to add more than 100,000 jobs in the next decade: personal care aides, home health aides, medical secretaries, and marketing specialists.  All of them currently have more female workers than male.  ‘Some of the decline in work among young men is a mismatch between aspirations and identity,’ Lawrence Katz, a professor of economics at Harvard University, told me last year. ‘Taking a job as a health technician has the connotation as a feminized job. The growth has been in jobs that have been considered women’s jobs—education, health, government.’”

MISMATCH BETWEEN ASPIRATIONS AND IDENTITY

Professor Katz’s remarks reminded me of a question that was recently posed to me: “Why do people believe manufacturing is better than services?”  My short answer was that it would be inappropriate to describe one over the other as “better.”  That said, there are some inherently positive externalities about manufacturing that should be acknowledged as significant and worth preserving.

In addition to the purely economic benefits of a strong manufacturing sector, there is a real sentimental aspect that promotes honorable behavior: one that tends to lie in nostalgia of a prior generation.  Many Americans can remember a father, mother, or grandfather that came home from a long day at the plant, and feel a sense of pride and admiration toward that person.  These family members were often first generation immigrants or had no higher-level education, yet they were able to return from a hard day’s work carrying the pride of building something; being responsible for a tangible product that people used and depended on.

These are reasonable aspirations for today’s prime-age workers.  Communities are better off when workers can take pride in building something meaningful like a car, jet engine, or steam turbine instead of a latte.  At Veryable, we believe that emerging developments in Digital Manufacturing techniques and solutions are about to re-introduce these opportunities to the U.S. worker.  To see how you can capitalize on these opportunities, please view our website: www.veryableops.com. 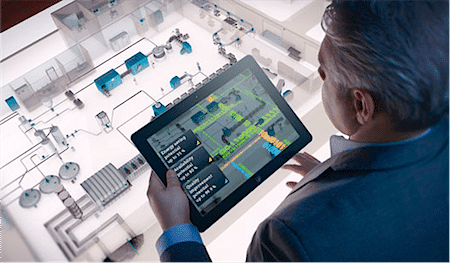